While 301 or 501 dart games are undoubtedly fun, many score calculations are involved during the entire process, which can be quite overwhelming for beginners. There are so many things to focus on all at once.

Hence, we are delighted to introduce the Chase The Dragon darts game. It never requires you to work with numbers; instead, the only thing you must pay close attention to is your consistent throwing accuracy.

Our article will dive into the game rules along with some variations to add more challenges to the gameplay. Let’s get started! 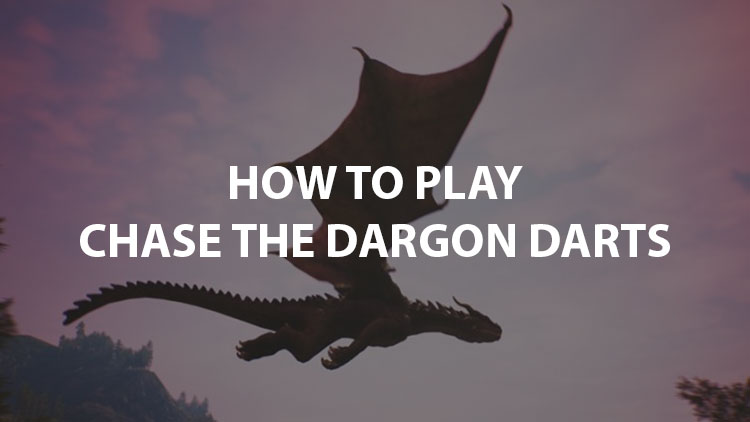 The Objectives of Chase The Dragon Darts Game

The goal of this game is to throw darts at the trebles (triple sections) from the number 10 to 20 in order before hitting the outer and inner bulls to seize the victory. Straightforward, right? Your throwing skills will be incredibly improved by playing Chase The Dragon Darts. Such an advantage will definitely be transferred to other dart games – the more reason why you should play this game more often!

The Rules of Chase The Dragon Darts

Have you ever played Around The World (one of the easiest darts games ever!)? If yes, then understanding this game will be a piece of cake. But for those who haven’t, no worry; we will go over everything from start to end!

Note: This game is best enjoyed with at least two players. However, you can still play by yourself for practice purposes.

1. Before the game starts, decide the playing order. (ex: Alex -> Linda -> Rosa). Play rocks, paper, scissors, or pick random cards, or use any other method you prefer. Here’s what we usually do: each player throws a dart. Who has the dart closest to the bull will go first. The furthest will go last.

2. Every player must hit the trebles in the sequential order from the number 10 to 20, then the inner and outer bulls. For example, you must hit the triple 16 before moving on to triple 17. No skipping allowed! If you hit a target that does not follow the order, that dart counts as a miss.

3. Each person has 3 darts per turn. If they hit the right target with their first/second dart, they can continue to use the remaining dart(s) to hit the next target in the same turn.

4. The game will end if anyone manages to “catch the dragons” by hitting all trebles of the numbers in play, plus the outer and inner bulls, before others. He/she will be declared the winner!

Scoring in Chase The Dragon Darts

Scores? What scores? This game has none of those!

Unlike 301 or 501 games – which require you to minus scored points from your total score until it reaches zero – there is no scoring in Chase The Dragon Darts. Simply hit all the segments in play in the particular order and that’s it!

Since no scores or points are included, keeping track of how everyone performs is relatively easy. Here is an example:

Some Variations of Chase The Dragon Darts

Want to make things even more interesting and competitive? Check out some of these rule modifications:

– Whenever a play hits a target, give him one or three more darts.

– For experienced players, after missing a certain number of darts (needed to be determined), they have to go back to the previous number.

– Players can modify the numbers in play (from 12 to 20 for example) to make the game last longer. But still, must hit the triple sections.

– Is there any player that seems significantly more skilled than others? Then tie him to a particular handicap – such as starting from a lower number – while others begin at 10 as usual.

That’s basically all there is to the Chase The Dragon darts game. It’s easily one of the most straightforward dart games we have ever experienced. Call some of your closest friends and invite them to the fun right now!

On a side note, the “Around the Clock” playing mechanism applies to many darts games. See 20+ other darts games here!