Professional darts players need their skills to compete at a high level. However, the darts they use must also help them promote their techniques. And the dart’s weight is an important factor. So, are you curious about the dart weights that professional players use?

Let’s find the answer through our article below! What Is the Most Popular Weight of Darts?

Darts can weigh from 12 to 50 grams. The most popular weight of darts is typically between 22-30 grams.

Beginner or casual players usually use heavy darts, around 30 grams, because they are easier to hold and stable when traveling mid-air.

Advanced or professional players normally prefer lighter darts, around 20-26 grams. This dart weight is very popular in pro tournaments. Many claim that lighter darts give them more control over the grip, throwing force, and actually improve their accuracy. Also, lighter darts are usually smaller than heavy ones, which makes it easier to hit two or three darts in one scoring segment on the board.

What Weight of Darts Do Pro Darts Players Use? 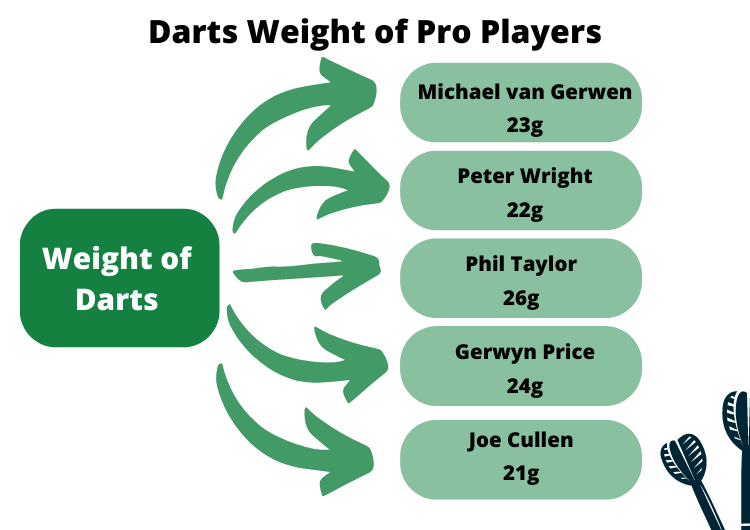 Below are some references for the weight of world-class players’ darts:

What Weight of Darts Does Michael van Gerwen Use?

Michael van Gerwen is a Dutch professional darts player. He is currently ranked number 3 in the world and was number 1 from 2014 to 2021. He has won numerous darts tournaments throughout his career, including the PDC World Championship three times.

Michael van Gerwen uses 23 gram XQ Max darts. His darts have a smooth silver finish and plenty of grooves along the barrel for easy grip.

What Weight of Darts Does Peter Wright Use?

Peter Wright is a Scottish professional darts player with the nickname “Snakebites”. He plays darts in the Professional Darts Corporation (PDC). Peter Wright currently ranked No. 2 in the world. He won the PDC World Darts Championship in 2020 and 2022. He is also a World Matchplay champion.

Peter Wright plays with 22 and 24 gram darts. Specifically, he uses 22 gram Red Dragons. Peter said “I love this shape dart and the feeling that the black coating gives me is superb and really helps me up on stage to get that extra confidence”.

What Weight of Darts Does Phil Taylor Use?

Philip Douglas Taylor is an English darts player, known by the nickname “The Power”. He is regarded as one of the best players of all time. He won 214 professional tournaments, with a record 85 major titles and 16 World Championships.

Phil Taylor chooses a slightly heavier dart than other professional players. He uses 26 gram Target Legacy Darts. They are his favorite darts, and this brand even produced Phil Taylor Legacy darts, a limited edition set, at his request.

What Weight of Darts Does Gerwyn Price Use?

Gerwyn Price is a Welsh professional dart player, with the nickname “The Iceman”. He had many consecutive wins at the PDC Players Championships. He is also a three-time Grand Slam Champion and former world champion.

Gerwyn Price uses 24 gram Red Dragon Darts. They are typically designed with a shark fin groove every 5mm. Red Dragon Darts also has a version with diamond grains in the barrel to make it easier to hold.

What Weight of Darts Does Joe Cullen Use?

Joe Cullen uses 21 gram Winmau Joe Cullen darts, which were made especially for him. While professional darts players often choose darts that weigh between 21 and 24 grams. Joe Cullen prefers to use darts with a relatively light weight. And he proved that it worked well when he threw darts at a board.

Other Factors of Darts That Pro Players Prefer

Besides the weight of the dart, pro darts players also rely on other factors such as material, shaft or flight to choose the most suitable dart for themselves.

What Materials Do Pro Darts Players Use?

Professional darts players typically use tungsten darts, as they are more durable and have properties that allow the darts to be slimmer while still retaining their weight. It is far better than other materials such as brass, nickel-silver, aluminum, and plastic.

What Shafts Do Pro Darts Players Use?

Professional players use a variety of shafts, depending on their personal preferences. Common choices among professionals include plastic, nylon, carbon fiber, aluminum, and titanium shafts.

What Flights Do Pro Darts Players Use?

Similar to shafts, each player will have different preferences for the flight. Most pro players like Michael van Gerwen use standard-shaped dart flights. Some other pro players, like Kevin Painter, use kite flights to increase the speed of the darts.

Darts for pro players require more than just the right weight. It is essential to find the right size and shape of dart that will increase accuracy and comfort. Additionally, it’s important to find the right type of grip and flights that will maintain stability when thrown. By considering all of these factors, pro players can maximize their performance and take their dart game to the next level.