Cricket Darts, or American Cricket Darts, is an excellent game to play with your loved ones and friends at home or in a bar. If you are new to this game, you may not know how to play Cricket Darts properly. Don’t worry! This guide will explain everything you need to know in the simplest way possible. 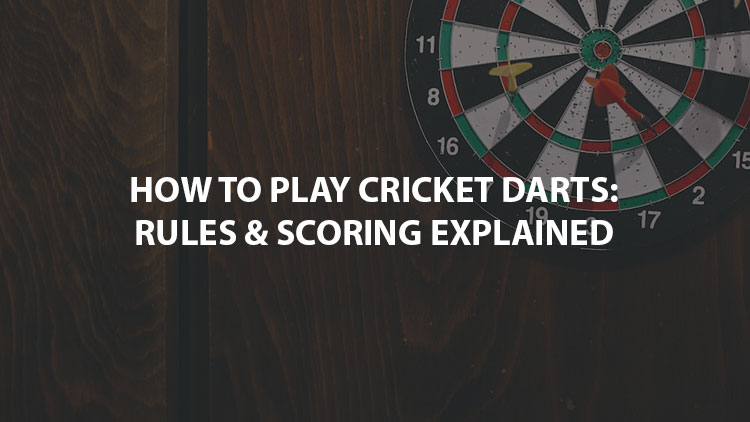 The common number of players in Cricket Darts is 2. Still, there is no restriction on the number. You can play with 3 or 4 players.

The Dartboard Numbers In Play

How to Score in Cricket Darts

This is the most confusing part for new players. To score points on a number, you have to “open” that number first. This can be done by hitting the number three times in one or more turns. Singles count as one hit, doubles count as two hits, and triples count as three hits.

Once you hit a number three times, you “own” or “close out” that number or it is “open” for you to score (just different ways to say the same thing). Any following hits you land on the number will score points.

Like the standard ‘01 game, doubles give double points, triples give you triple points, and singles give you single points. The outer and inner bulls are worth 25 and 50 points respectively.

Let’s have an example:

If you open a number, you can keep scoring points on it until your opponent(s) also hits it three times and “close” it permanently. Such number then becomes out of play for the rest of the game.

Note: There is no rule for the order in which the numbers must be closed out first. Multiple numbers can be hit in a single turn.

How To Win A Game Of Cricket Darts

How do you win Cricket Darts? You must have the higher or highest score when all the eligible numbers plus the bullseye are closed to win the game.

How To Keep Scores In Cricket Darts

There are many things to track in this game, including each number’s “open” status for each player, the “close” status, and each player’s score. The best way is to write things down. You can draw a Cricket Darts scoreboard like this: 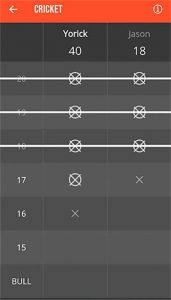 Here is the universal rule to keep track of a number being opened or closed:

Below or above each player’s column, their total scored points are noted.

An Example Game of Cricket Darts

The game goes on until all the numbers plus the bullseye are closed. Whoever gets more points win the game.

1. Go for the highest targets. In Cricket, it’s a good idea to start with the higher numbers since they give the most points. The segment giving the highest points on the board is triple 20. So, try to open the number 20 first.

2. Aim for the triples to quickly open a number. For example, in the first turn, you hit triple 20, double 20, and triple 20. You end the turn with the number 20 opened (with your first dart), and the score of 100 (with your second and third darts).

4. Don’t overlook the bullseye. Since it’s hard to hit, it’s hard to be closed. It’s worth the try if you are confident in your throwing skills.

5. Improve your throwing skills, keep practicing, and have fun!

There are a lot of variations to this popular Cricket Darts game. We list some options below.

As you can tell by the name, there are no points in this game. A player has to do is open all eligible numbers and the bullseye first to win. This game is advised for new players.

The rules are the same but here’s the difference. The player with the lowest points wins the game. Every time you open a number and score on such number, the scored points count for all the players who haven’t scored three times on that number. Cut Throat Cricket is fun to play when you have more than 2 people.

This variation is for 2 players. There will be a blocker, and there will be a scorer. The numbers in play can be all numbers. The blocker goes first and tries to close all the numbers. The rule to close a number needs to be determined (for example, hitting a number 3 times or hitting a number’s double section). The scorer will try to score as many points as possible on the numbers that haven’t been closed. The standard scoring of the 301 game applies.

After all the numbers are closed, calculate the final score of the scorer. Then switch roles for round 2. After two rounds, which scorer has a higher score wins.

This is a variation from the UK. The main difference is the introduction of doubles and triples as separate and additional sections in play. There are two types to play: “Slop” and “Strict”.

According to the Strict rules, only the doubles and triples of the numbers 15 to 20 count.

If you open a number 15, and then you hit a triple 15 when the number 15 isn’t closed, you have the option to choose to take 45 points or open the triple section of the number 15.

In this blog, you have learned:

Cricket is a very common game since it can be very fun and challenging. Start practicing so you can easily join the fun with other darts fellows. Happy darting!