Home
Dartboards
Winmau Blade 5 vs Blade 6: Which Model You Should Buy

Winmau Blade 5 vs Blade 6: Which Model You Should Buy

Winmau is a leading company for dartboards and other darts equipment. You just cannot go wrong with the Winmau Blade 5 and Winmau 6 in terms of quality.

So, in this blog, we will skip the latter group and focus on comparing the 3 models: Winmau Blade 5, Blade 5 Dual Core, and Blade 6 Triple Core (latest model), which we believe brings you the best bang for your buck. The three models share a lot of features for a top-notch bristle dartboard, including the tournament size, excellent self-healing, Rota lock system, thin and staple-free wiring.

The models are made nearly 18 inches, which is the official size for pro tournaments. Currently, the Blade 6 Triple Core is officially used for many PDC events, including the Championship series.

All boards are made from the finest East African sisal fiber, tightly packed, offering an excellent self-healing ability, and holding darts very well.

Every darts player hates staples because they cause bounce-outs when darts hit on them. The wire that divides segments on these Winmau boards is made ultra-thin and completely staple-free, which reduces bounce-outs and increases scoring potentials.

The wire is also made sharper with a 60-degree angle, which helps drive darts into scoring areas.

All boards go with a Rota lock system. You can easily level and keep the board stable against any surface. The number ring is also removable, which helps you rotate the board regularly, makes sure different segments get even hits, and extends the board’s lifespan.

The major differences between these models lie in the sisal layers, price, aesthetics, bullseye’s wire, and usage.

The Blade 5 standard has only one layer of sisal fiber. However, it still offers great self-healing.

The Blade 5 Dual Core has two layers: a highly-compressed inner layer and a lower-compressed outer layer. The outer layer is softer for easier dart penetration while the inner layer increases the resistance for improved durability.

The Blade 6 Triple Core applies the latest technology to have an extra inner layer, which is carbon fiber-reinforced sisal. This makes the board the most long-lasting and advanced product on the market.

If you want your board to stay alive for the longest time, go for Blade 5 Dual Core or Blade 6 Triple Core.

The Blade 6 Triple Core has a 25% thinner bullseye’s wire, which is better than the two Blade 5 models. This is because of the latest ‘Density Control’ wire, which is applied to the Blade 6 models only.

3. The Look of the Board and Ring

The Blade 5 has some kinds of “veins” on the surface (this is not a defect or anything similar. This is a common thing when joining sisal biscuits in high-quality sisal dartboard).

The Blade 5 Dual Core and Blade 6 Triple Core, on the other hand, are “vein-free” and have a smooth-looking surface due to the multi-layer technology.

To us, the Blade 6 Triple Core simply looks better due to the color tone, new graphics, and the new anti-glare and laser-cut steel number ring. All of these fit perfectly together, giving an outstanding visual for the board.

All boards can be used for both casual plays and professional practice. But it’s worth mentioning that the Blade 6 Triple Core is currently and exclusively used for many big PDC events, including the Championship series.

Go for the Blade 6 Triple Core if you want to practice professionally since it’s now the new standard for pro tournaments.

The price difference between the Blade 5 and Blade 5 Dual Core is not much. So, we suggest going for the Dual Core model since you will get more out of the two-layer sisal.

The Blade 6 Triple Core is more expensive, but it’s understandable since it’s probably the most advanced board in the market and widely used among the pros.

Our Advice on Which to Buy: Winmau Blade 5 vs Blade 6

We suggest you go for the Winmau Blade 5 Dual Core since the price difference is not much compared to the standard Blade 5. You will get better durability and playability due to the dual layers of sisal.

In case you don’t mind about the budget or you need a board for professional practice, then Blade 6 Triple Core is the one. It’s the most advanced board in the market and widely used among the pros. 4 Best Dartboards for Your Garage (That Make Sense to Buy)

Our suggestions of dartboards for your garage are Wimau Blade 5, Winmau Professional Set, Arachnid Cricket Pro 800, and Viper Nepture. Read to find out why! Cricket Pro 900 has a higher price than the 800 since it offers certain advanced features and more games. Let’s find out more! 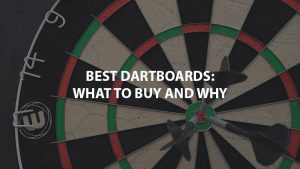 By spending months testing many dartboards of many types, we understand the user needs and find the best dartboards. See our top list!